BRICKFLOW FOR BROKERS IS NOW LIVE!
Find Out More For those that haven’t seen it before, Brickflow’s monthly Industry Insight piece is a monthly round up of the common trends and conversations we’re having with property developers, brokers and also with lenders.

We have 42 lenders on the platform now, and we are speaking to a good number of them every day, so it gives us a really good feel for the market sentiment at any one time.

A sharp rise followed by a sharp fall?

The big news is where interest rates are going. And at the moment it’s up and rapidly.

As we all know, a big reason for our inflation being so high was due to energy prices.

The government intervention in these markets by capping the unit price of energy was much needed. This had a positive effect on inflation forecasts, by bringing those forecasts down.

However, some of that good work was undone by Kamikaze Kwarteng's quite unexpected abolition of the 45p tax rate in the mini-budget. Causing a further loss of confidence in UK PLC, and therefore Sterling to weaken.

Weak sterling is good for exports as it makes our goods cheaper, but the UK is traditionally a net importer (meaning we import more than we export). So now the goods we import are getting more expensive, inflation forecasts will go up again.

Wednesday’s intervention by the Bank of England to shore up the Gilt market has provided some respite and the pound has rallied, but this isn't over yet. How high will interest rates go? Well that all depends on how the government reacts.

Reversing the 45p tax cut might help, but it would also further undermine the already paper thin confidence the international community has in our government. It’s a sticky situation all of their own making (again).

Anyway, current futures are suggesting rates could be somewhere between 5% and 6% by summer next year. Which is a very scary thought.

However, I have spoken to some contacts that trade bonds and gilts and read some articles this week, that suggest rates will rise quickly, but then also could fall quickly once inflation has been brought under control.

In a recession, typically central banks will cut rates, but the Bank of England didn’t have that option as our rates were already low. Therefore, by increasing rates decisively now, not only does the Bank of England control inflation quicker, but it also has somewhere to go next year when inflation is back under control and economic stimulus is needed.

One reason why this view makes sense to me, is that there are a lot of mortgage borrowers with debt they can only just afford at record low fixed rates.

Therefore, if rates stay too high for too long, then the number of fixed mortgage rates that mature grows, and the number of people that can no longer afford their mortgage is amplified, and the whole housing market collapses.

One just has to hope the Bank of England is too smart to let that happen.

Anyway, so how is this all affecting lenders?

Well the good news is that lending appetite remains strong so far. There has been very little change in loan to cost or loan to GDV metrics across the platform. The big change however, has been in pricing.

As I said before, Brickflow now has 42 development finance lenders on the platform. And prior to the recent rate rises more than 20 of those offered fixed rates. Now it is 10 lenders.

As rates continue to rise, the number of fixed rate lenders will continue to fall, so if you have a pipeline scheme move now to secure fixed money.

Gone are the days where borrowers can only speak to one or a handful of lenders. There is too big a disparity in the market at the moment. Borrowers that take this approach are just giving profit away.

We have specialist development lenders lending at 65% or 70% loan-to-GDV on a fixed rate basis. We then have banks and challenger banks lending at a lower loan-to-GDV’s, say 60, at the same starting rate, but tracking the base rate.

So developers that are going back to the same lender and not shopping around, quite frankly, must have more money than sense. The pace of change is frighteningly quick, so please do shop around.

A quick good news story. We saved a developer £ 254k in interest charges last week on one transaction. He had an offer in hand from a lender and our software was able to identify a better option, and it only took him 2 minutes to complete that search. Not even Cristiano Ronaldo earns £ 254k in 2 minutes.

Are you on the lookout for new sites? Then consider waiting.

Next year, I think we’ll see a big correction in land prices.

A correction is long overdue. But the quantitative easing, and the government pressure on lenders to extend loan terms and / or allow payment holidays during Covid meant the correction never came.

It was absolutely the right thing to do at the time, but all it did was delay what was needed.

Land prices have stayed buoyant, because house prices kept rising. We’re now seeing a plateau in house values, followed by a drop next year, so something has to give.

As we all know, build costs have risen significantly over the last 18 months. Land owners held firm on prices and competition for sites was high. Developers therefore took a hit on profits by accepting sub 20% developer margin on their deals. Us property developers can’t take any more of a hit, so the only thing that can give is land values.

And I’ll illustrate this point by way of an example;

Let’s say I’ve purchased a piece of land on a bridge for £ 1m a year ago.

The site had outline planning, and my plan was to roll into a development loan and build it out.

The land would have been valued at £ 1m because the GDV of the site when built was £ 4.5m.

From the GDV, the lenders valuer would have subtracted my lender costs, my build costs and my developer profit, which totals £ 3.5m. Subtract £3.5m from £4.5m and that gives a residual land value of £ 1m.

Since the loan has completed, build costs have risen significantly. Lender costs are also now on the rise, and GDV’s are falling. That piece of land is no longer worth £ 1m, it’s worth £ 800k at best, probably less.

The bridging lender is looking at that situation, and thinking I’ve got £ 700k on £ 800k and falling. I need to get out of this position quickly.

The development loan I thought I could get on the land is now lower than what I owe, so I’ve got to put more money in to move away from the bridge lender. If I can’t raise that money, I’m stuck and I’m a forced seller.

Every year, leading up to Christmas, lenders will assess their lending book and think let’s get rid of any loans we don’t want to carry into the New Year.

There will be thousands of these situations across the country, and lenders will not want to carry them into 2023. Therefore, I believe there will be a lot of sites at reduced prices in the market in Q1, Q2 and Q3 next year, so make sure you have cash available.

Here’s a chart showing the build up to 2008; as you can see the gains were much bigger year on year leading up to the crash. Gains year on year since the crash, have been a lot more modest. So whilst a correction will occur, it will be nothing like the scale or depth of the 2008 drop in prices. 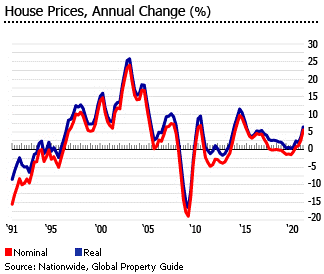 It was inevitable, that after so long without them, that we are now starting to see them creep in. We’ve seen 2 in the last 2 weeks for users on the platform.

We always tell people that it’s good practice to get opinions from at least 3 agents to accompany any decision in principle application to a lender on the platform.

The main reason for that is you have had at least 3 people give you a sanity check on your prices. Better still get a desktop valuation from a credible valuer.

This also helps the lender get comfortable with the numbers early on, which means they'll invest more time in pricing the deal correctly for you.

The fundamental difference between perhaps a valuer and an agent at the moment, is that an agent might be looking at where the market is today.

A lender’s valuer is looking more at the worst case scenario in 18 months or so. These are fundamentally different views.

When the market is rising, the differences of opinion are much closer, or there is no difference, so down valuations are not really something we’ve seen since before Covid.

Ultimately, a downvaluation can kill your deal before it starts, so try the following to stop that happening;

You could still get a down valuation but at least you know you’ve given it everything you had.

Brickflow is designed to be used by experienced finance & property professionals and property developers using Limited Companies or Incorporated Partnerships, to source and apply for development finance loans.

Brickflow is not an advisory business and does not give advice. It can deal with purely factual inquiries and provide information but it will not give an opinion or recommendation in any circumstances.

Brickflow does not provide personal mortgages, but your home and other assets are at risk if you provide a personal guarantee for a corporate loan.

How do changing interest rates affect my development finance?

Insights into changing interest rates, development finance and property loans. Find out which lenders link to the BofE base rate, pricing methods and...

Industry Insights (Q3 2021): the inside track of what we’re seeing in property development

Why data is no longer a dirty word in property development

Data is a powerful tool when used in the right way. Find out how proptech and fintech companies are democratising data to make your life easier.