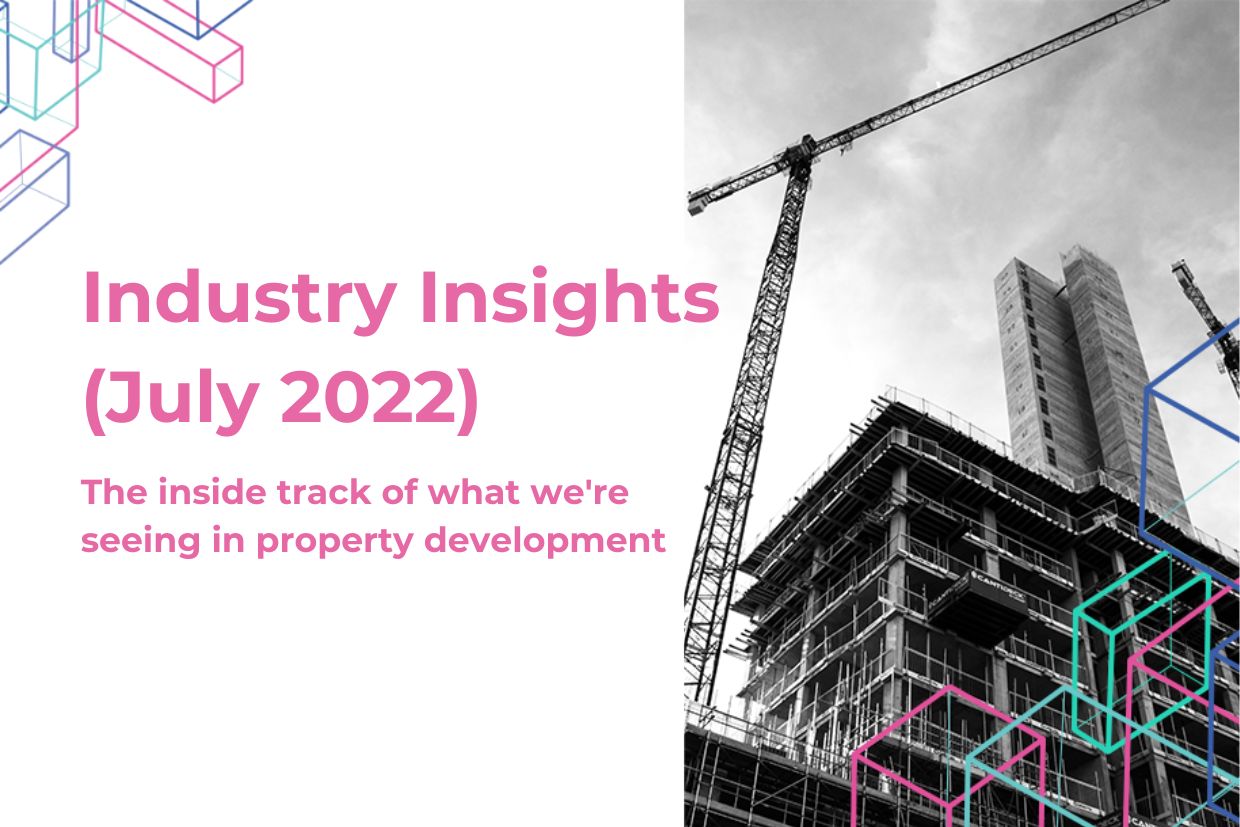 The inside track on property development. Read about how interest rate rises might impact you, lender reactions, build costs and land price predictions.

As we enter what is traditionally a quieter time of year, with family holidays taking centre-stage for many, we’re pleased to report the market is unseasonably busy.

A combination of future rate rises, a potential drop in build costs, and a housing market that is still just about keeping its head above water, seems to be helping us all buck tradition.

What happens when interest rates rise?

When interest rates rise, any loan that is tracking the Bank of England base rate becomes more expensive to service. Other indices such as LIBOR or SONIA will also increase. Borrowers that have fixed rates are unaffected, but the cost of raising fixed rate loans for lenders will increase in the wholesale markets, pushing up the cost of fixing loans for new borrowers.

In the development finance space, lenders take a mixed approach. Prior to the recent base rate rises, only a small proportion of lenders (6 out of 40 on the platform) were tracking the base rate. A slightly larger number were tracking LIBOR, but around half were offering a fixed cost of borrowing or tracking their own internal base rate.

However, now the base rate has gone up, more and more lenders have had to start offering trackers.

What does an interest rate rise mean for borrowers?

The result for borrowers is increased debt costs, resulting in smaller development finance loans, and therefore a larger deposit. The differences are marginal currently, but will become more noticeable as the base rate continues to rise.

For every 0.25% increase in the loan interest rate, this adds £ 2.5k per year, per million of borrowing. To put that into context the average development loan in the UK is £ 5m. If borrowing rates increase by 2.5%, property developers will have to find an extra £ 180k deposit on a £ 5m loan with an 18 month loan term, compared to what they would have been able to borrow in Q4 of 2021 when rates were 0.1%.

For many borrowers, this is the difference between being able to do the project and not, and could be part of the reason for the market upturn. Urgency created by forecasted rate rises certainly explains why the regular mortgage markets have been so busy.

It will be interesting to see how lenders continue to react. So far lenders have been reluctant to pass on the full rate increases to borrowers as it will make them uncompetitive. Instead, many lenders have reduced their own lending margins rather than pass on the increased costs to the customer.

Whilst it’s possible to do this for new borrowers, for existing borrowers, their loan contracts will not give any flex.

Not only have these borrowers borne the brunt of a rise in material costs, they’re now paying higher interest charges. Talking about kicking developers when they’re down.

This is another great example of factors outside of developer’s control. Property development is an extremely risky business and developers deserve more support from the industry, not only in terms of understanding how their loan contracts work but also in finding the right finance partner in the first place.

You can read more about this topic here.

According to the Build Cost Information Service, month on month inflation for build costs have peaked.

As year on year inflation for June peaked at nearly 15%, this news comes as welcome relief for many. Costs are not forecast to fall though, just increase at a slower rate. Not the respite most are looking for. However, this potentially signals the start of an economic downturn. Construction costs are often cited as a harbinger of economies slowing down, as infrastructure investment and demand fall.

Whilst the cost of materials has been well documented, the cost of labour has perhaps been less so. Interestingly, respondents to The Private Housing Construction Index gave the following as reasons for the rises in costs; We’ve recently written about this topic in more detail here.

Are land prices going up or down in the UK?

Land prices fluctuate depending on many factors, but they are a good barometer for the economic outlook. Land prices are calculated by working out the Gross Development Value (GDV) of a site, minus build costs & professional fees, minus lending costs and subtracting the developer profit (circa 20%). Whatever is left is the residual land value.

Savills are predicting land price growth will more than halve over the next 5 years compared to the last 12 months. They predict prices will go up by 4.4%, compared to 9.3% over the last year.

In the UK, we have experienced large increases in build costs (material and labour) and now we have increasing borrowing costs to factor in. As long as GDVs are rising at roughly the same rate (as they have been), then land costs are unaffected.

If GDVs plateau, or fall, then developers have the choice of reducing their profit margin, or paying less for the land. To date, we have seen developers cutting their margins as the market is very competitive. However, there is a limit to how much that can happen, and eventually land owners will have to accept a lower price. I’ve spoken to numerous developers who have been outbid on sites, and then are offered the site again a few months later at a better price. Whilst it’s easy to get excited in those situations, remember the fundamentals; what’s it going to cost to build, what can it be sold for in 18 – 24 months, and how much will the loan cost. Identify a margin of error on all the above and decide a price that’s affordable. Ultimately, somebody else couldn’t make it work and pulled out, so don’t do the same – it will cost time and professional fees to find out the wrong price is being paid.

Certainly over the next 12 months, I can foresee some forced seller positions, as borrowers come to the end of their bridge loan terms, and may not be able to get the development finance they anticipated. As build costs and lending costs increase, the land loan element of a development loan will fall, meaning someone that took a bridge loan 12 to 18 months ago, whilst they got planning, would have planned to be able to get a higher land loan on their development finance. This leaves them in a position where they have to introduce more equity to develop the site.

Some people will have the means and some won’t. Those that don’t may end up being forced to sell quickly by the current lender, which should mean some discounts for buyers.

What is nutrient neutrality?

Nutrient neutrality is ensuring that any new property development does not contribute additional phosphates or nitrates to our rivers, estuaries and wetlands. At the planning stage, Natural England will assess the likely impact of contaminants and decide whether planning permission is granted. There are 74 councils and planning authorities that are affected by these rules, and it’s estimated that there are around 120,000 new homes with planning permission that cannot currently be built.

We wrote an article about this recently and we had a lot of responses from people that have been affected. We’re now preparing a press release and if you are happy to share your experiences and / or thoughts on this topic, then we would love to hear from you. Please contact our PR Manager, Francesca Breeze at francesca@brickflow.com.

The inside track on property development. Read our views on borrowing costs, overages, land payments, whether it’s a good time to buy and looking...

The inside track on property development. Read our views on land price issues, how to calculate residual land values and the impact of interest rate...

Industry Insights (Q3 2021): the inside track of what we’re seeing in property development